This week is National Teen Driver Safety Week, so this is a time to bring up the real dangers teens face when behind the wheel of a motor vehicle. According to the Centers for Disease Control and Prevention, auto accidents are the leading cause of death for teens. Moreover, the National Highway Transportation Safety Administration reported that almost half of teen drivers involved in a collision are killed.

While the above statistics present a real problem in regards to teen drivers, a recent survey found that only 25 percent of parents have had a discussion with their teens stressing the importance of driving safely.

The NHTSA discusses the following rules for teens in its “5 To Drive” campaign: 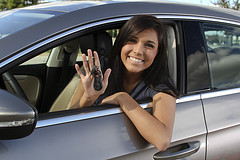 The “5 to Drive” campaign was launched during Teen Driver Safety Week last year, and it addresses the five most dangerous and deadly behaviors for teen drivers. The thought behind this initiative is to help parents address these five key issues when talking with their teens about driving.

As parents, it is our responsibility to set a good example for our children by always wearing our seat belts and stressing the importance of why we wear them. Seatbelts save lives. In addition, it is important to continue setting a good example by following all posted speed limits and other rules of the road.

Alcohol is another key issue in teen driver deaths. In 2012, NHTSA statistics showed that 28 percent of teen drivers between the ages of 15 and 20 who were killed in crashes had been drinking.

Another serious problem for teens is texting and driving. In 2012, a study found that cell phones distracted nearly 1 in 5 teens in distraction-related fatal crashes. Extra passengers in the vehicle also cause distraction for teens, and the risk for an accident only increases with each additional passenger. In fact, just one passenger raises a teen driver’s risk of a fatal crash by 44 percent.

Help save the lives of teen drivers and talk to your teen today. If your teen has been the victim of a motor vehicle collision, a Tampa Bay Auto Accident Lawyer at Whittel & Melton can help. For a free consultation, call us locally at 813-221-3200 or toll-free at 866-608-5529.