For most, Labor Day weekend symbolizes the unofficial end of summer. As a three-day weekend, this gives many Americans the chance to celebrate with friends and family one more time before fall comes around and the weather gets cooler. Whether you plan on taking one last road trip for a weekend getaway or staying home and celebrating with family and friends, the Tampa Bay Injury Lawyers at Whittel & Melton want you and your loved ones to stay safe!

Labor Day Weekend has a high rate of preventable accidents, injuries, and deaths, both on the roadways and at homes across Tampa Bay and the rest of the country. To help you and your loved ones stay safe this holiday weekend, our Tampa Bay Injury Lawyers have compiled a few helpful safety tips:

END_OF_DOCUMENT_TOKEN_TO_BE_REPLACED

Four men were rescued on Friday after their boat capsized near the Sunshine Skyway Bridge.

A water rescue call came in around 12:52 p.m. for a small boat that had capsized at the bridge, according to St. Petersburg Fire & Rescue. 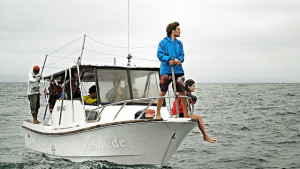 Officials were able to find all of the men – one was clinging to the capsized boat, and three others were found less than a mile off shore floating west of the bridge.

All four men that were on the boat had their life vests on.

None of the boaters were harmed.

Boat accidents can refer to a vast number of incidences and usually occur due to the following reasons:

END_OF_DOCUMENT_TOKEN_TO_BE_REPLACED

A woman suffered severe injuries Sunday evening in Tampa in a jet ski crash on the Hillsborough River.

The driver of the jet ski lost control after crossing into the wake of a passing boat near the North Boulevard Bridge Sunday evening, according to Tampa Police Department Marine Patrol. The jet ski struck a metal sign posted near the center channel. 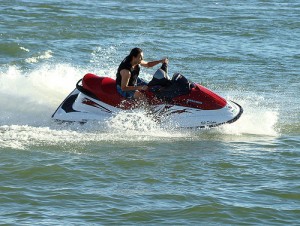 Officials believe the woman, who was a passenger on the jet ski, smashed her head on the sign. She was taken to Tampa General Hospital in critical condition. Officials have not released any further information about the woman.

The Florida Fish and Wildlife Conservation Commission is currently investigating the crash.

Investigators do not believe at this time that alcohol or drugs played a role in the accident.

In a study conducted by the University of Florida, researchers found that jet ski accidents actually produce far greater injuries than boating mishaps. The most common jet ski injuries include head and brain injuries and severe trauma to the chest and abdominal areas. Most of these injuries occur when a jet ski collides with a stationary object or other vessel causing the driver or passenger to be thrust into the object.

If you have been involved in a jet ski accident of any kind, you and your family may be entitled to financial recovery for:

END_OF_DOCUMENT_TOKEN_TO_BE_REPLACED

Spring break is officially here, which means there are going to be lots of kids, teens, families and college students taking cruises to exotic places. While some will be cruising with their parents, others will be venturing off into the seas with friends. Due to the fact that there will be a higher number of young passengers on board cruise liners, our Tampa Bay Injury Lawyers at Whittel & Melton would like to point out some tips to keep yourself and those you are travelling with free from danger. 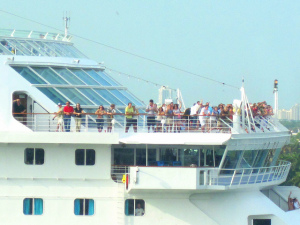 Cruise vacations should be fun, relaxing and enjoyable. However, the reality is that many cruises can bring out all kinds of hazards, such as injuries, illnesses and even rape and other crimes. Statistics show that sexual assault is the number one type of crime that is most likely to occur on cruise ships, which is why it is essential for spring breakers to always be on high alert. If you have planned on going on a cruise during spring break, please review the following safety tips:

END_OF_DOCUMENT_TOKEN_TO_BE_REPLACED

This Saturday, Tampa Bay-area residents and visitors join in an unusual celebration called Gasparilla, one that marks the beginning of a new year and serves as a reminder of ancient times. The Gasparilla Pirate Festival was named in honor of the pirate Jose “Gasparilla” Gaspar, who is famed for terrorizing Florida’s west coast during the late 18th century and early 19th century. On Saturday, the city of Tampa will be “invaded” by Gasparilla and his men when their 165-foot pirate ship arrives in downtown Tampa, known as the Jose Gasparilla. The mayor of Tampa gives the key to the city to the pirate captain and a victory parade begins throughout the city’s streets. 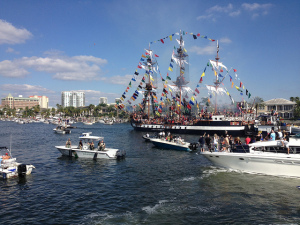 While this event is a lot of fun, it can also be very dangerous if proper steps are not taken to ensure the safety of yourself and others while on a boat. The following safety tips could be of use to you this weekend:

This weekend you will see many law enforcement vessels on the waterways, including boats from the Coast Guard, Tampa Police Department, Florida Fish and Wildlife Conservation Commission and the Hillsborough County and Pinellas County sheriff’s offices.

END_OF_DOCUMENT_TOKEN_TO_BE_REPLACED

Boating is a popular and enjoyable activity here in the Tampa Bay area, but it is also a pastime filled with accidents as well. If you find yourself hurt or injured while boating due to someone else’s negligent or careless actions, it is worth speaking to a Boating Accident Injury Lawyer at Whittel & Melton about your rights. 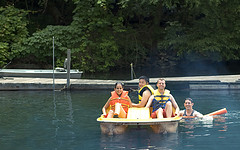 Coast Guard watchstanders at Coast Guard Sector St. Petersburg received a report around 3:50 p.m. that the boat had begun taking on water from a six-inch hole in the hull.

A boat crew from the station made it to the scene around 4:30 p.m., plugged the hole, began dewatering and put the boat in tow.

The boat was safely towed to Bradenton Beach Marina by 8 p.m.

A command duty officer at Sector St. Petersburg mentioned a valuable tip for boaters: “It is important for boaters to remember the Coast Guard can always be reached via channel 16 in an emergency. Having a marine band radio on board a vessel, like in this case, can save lives when a situation becomes an emergency.”

In the United States, boating collisions are the most common type of accident. More than 8 percent of all boating accidents result in fatalities. Nearly half of boating accident tragedies occur because of passengers falling overboard, with 70 percent of those victims drowning. Of these drowning accidents, 86 percent involve passengers not wearing a life jacket. The most common recreational boat accidents involve the following:

When operating a boat, there are certain steps that can be taken to prevent a boat accident injury or minimize the damage. The following tips can prove useful to boaters when an emergency situation arises:

END_OF_DOCUMENT_TOKEN_TO_BE_REPLACED

Two people were injured recently after a personal watercraft collided with another watercraft near Bunce’s Pass near Fort De Soto Park in Pinellas County.

According to the Florida Fish and Wildlife Conservation Commission, a 47-year-old man and a 16-year-old boy, both of Kissimmee, were riding on the watercraft around 5:30 p.m. when the accident happened. 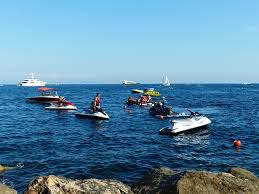 Both were taken to Bayfront Health St. Petersburg with non-life-threatening injuries.

The other watercraft involved in the collision was driven by a 44-year-old man.

Nor further information is available regarding the incident at this time. The accident is currently under investigation.

Boating accidents are quite different than automobile crashes in that there is not usually an accident scene to investigate. These incidents rely heavily on witness testimony as well as physical evidence in and on the boat. Watercraft accidents can be complex, which is why it is necessary to have a maritime lawyer working in your corner in order to achieve successful results.

END_OF_DOCUMENT_TOKEN_TO_BE_REPLACED

The Tampa Bay area is well known for its beautiful rivers, lakes, bays and access to the Gulf of Mexico. Because areas like Clearwater Beach and Treasure Island have so many various waterways, jet skiing is quite popular among tourists and residents alike. However, jet skiing is an inherently risky activity, with the U.S. Coast Guard broadcasting more than 700 fatalities involving jet skis and more than 3,000 injuries nationwide.

A moment of negligence or recklessness on a jet ski can result in severe personal injuries and even wrongful death. The good news is that most jet ski accidents can be prevented by understanding the common causes of these accidents and how to identify risky behaviors that can easily lead to an unfortunate mishap. Moreover, it is vital that jet ski riders know how to operate a jet ski in a safe fashion before heading out on the waterways.

Nearly 15 percent of all accidents involving personal watercrafts, such as jet skis, were caused by speeding drivers, according to the US Coast Guard. Driving a jet ski can undoubtedly be an exhilarating experience. As a jet ski driver, it is important to not get carried away when operating these vehicles as the amount of horsepower these vessels have can be intense. When excessive speeds are used, serious accidents can occur.

Many people hop on jet skis and take off into the water without fully realizing how dangerous these vehicles can be. It is important to get the proper training and experience before darting off in these vehicles. The National Transportation Safety Board estimates that nearly a third of drivers involved in a jet ski or other personal watercraft accident had operated the vehicle ten times or less prior to their accident.

As water sports like jet skiing become more and popular, waterways become more crowded, increasing the number of distractions for drivers. Unnecessary collisions on personal watercrafts are often caused by drivers who fail to pay attention to their surroundings. By staying focused while on a jet ski, you can prevent a catastrophe from occurring.

One of the leading causes of jet ski accidents is reckless driving. Often referred to as the motorcycle of the waterways, jet skis can be quite dangerous when operated in a reckless manner. Following the rules of the waterways is crucial when operating a jet ski, and failure to do so can result in broken bones, fractures, traumatic brain injuries, spinal cord trauma and even death.

END_OF_DOCUMENT_TOKEN_TO_BE_REPLACED

A 28-foot sailboat is at the the bottom of Sarasota Bay after a fire the vessel sunk the ship.

Bradenton Police Department believe the cause of the fire is believed to be a lighted canister of Sterno cooking fuel. However, the investigation is ongoing. 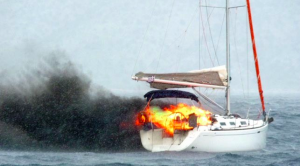