Over the past 15 years, motorcycle deaths have risen across the United States and seem to have reached an all-time high of more than 5,000, which some believe is a direct result of states weakened helmet law requirements.

According to a recent insurance industry study, the average medical claim from a motorcycle collision increased by more than one-fifth in Michigan last year after the state eliminated laws requiring motorcyclists to wear helmets. However, this is not just a problem in Michigan it is also a huge issue for Florida and every other state across the nation. Motorcyclists throughout the U.S. opposed to mandatory helmet laws have been fighting state helmet laws for years while the death toll for bikers continues to climb.

Michigan required all motorcycle riders to wear helmets for more than 40 years, but state legislators changed the law last year only requiring riders under the age of 21 to wear a helmet. In the two years before the law was changed, the average insurance payment on a motorcycle injury claim was $5,410. After the law was changed, the cost increased to $7,257, an increase of 34 percent, according to the study conducted by the Highway Loss Data Institute.

The study found that the actual increase was about 22 percent after adjusting for the age and type of motorcycle, rider age, gender, marital status, weather and other factors relative to a group of four comparative states, Illinois, Indiana, Ohio and Wisconsin.

While other studies have shown an increase in motorcycle deaths after states weakened mandatory helmet requirements or eliminated them all together, this industry is the first of its kind to look specifically at the effect of repealing helmet laws compared to the severity of injuries determined by medical insurance claims. 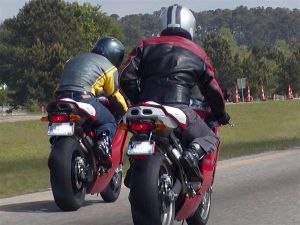 While some blame weak helmet laws on the increased number of biker injuries and fatalities, others are pointing the finger at something else entirely. The president of American Bikers Aimed Toward Education of Michigan, attributed the increase in the severity of injuries on motorcyclists who fail to take the required safety courses needed to obtain a special motorcycle license. He claims bikers without motorcycle licenses have accounted for a larger number of fatalities and injuries in recent years.

Although there is no way to determine how many of the Michigan claims involved motorcyclists not wearing helmets, a recent study by the University of Michigan’s Transportation Research Institute found a momentous increase in bikers involved in crashes who were not wearing helmets after the law changed. Results from the study show that from April 13, 2012, the first day after the change was implemented, through the end of the year, 74 percent of motorcyclists involved in crashes were wearing helmets. That number is down from 98 percent in the same period for the previous four years.

Currently, 19 states and the District of Columbia have laws requiring all motorcyclists to wear a helmet. Another 28 states require only some motorcyclists, usually younger bikers, to wear a helmet, and three states do not require any riders to wear helmets. Over the course of nearly two decades, states have been slowly repealing or weakening mandatory helmet laws.

Last year the National Highway Traffic Safety Administration sent spectators to states last year to count how many motorcyclists wore helmets, and found that 97 percent of bikers in states with universal helmet laws were wearing helmets compared to 58 percent of riders in states without these laws.

Helmet use consistently reduces motorcycle crash injuries and death, according to the Centers for Disease Control and Prevention. While the CDC encourages the enactment of universal helmet laws in all states, opponents believe that wearing a helmet is a personal choice for bikers. Some go as far to argue that forcing riders to wear a helmet is infringing on their personal liberties. Regardless, the state of Florida requires that anyone under the age of 21 wear a helmet and eye protection. A helmet is also required for anyone over the age of 21 who does not carry at least $10,000 in medical insurance benefits for injuries sustained in a collision to either rider or passenger.

If you or someone close to you has been involved in a motorcycle crash, you may have questions about your legal rights and options. A Tampa Bay Motorcycle Accident Attorney at Whittel & Melton can help you decide how to proceed. Contact us today online or call us now at 813-221-3200 for a free initial consultation and case evaluation.